Our Country's Good by Timberlake Wertenbaker

Performed at The Edward Alleyn Theatre, Dulwich College in October 2007

When I was invited to see this latest Dulwich Players production of Our Country's Good I jumped at the chance, as it's always been one of my favourite plays. I have to say it has been admirably staged by Jan Rae and sterlingly performed by a cast of 12 [I hope I've got that right.]

Set towards the end of the 18th century in an Australian penal colony, Our Country's Good is author Timberlake Wertenbaker's paean to theatre. Showing as it does theatre's potential to redeem, enlighten and transform, the play has lost none of its power since it was first performed at the Royal Court in 1989. I was very fortunate to see the original production, and I must say this newest production also lived up to my expectations.

The director has worked wonders with a minimal use of set and props. Some very authentic costumes add colour and definition where some of the doubling proves confusing. As nearly all of the cast double up, playing both convicts and officers, this requires considerable skill, as well as the adoption of a variety of regional accents and physicalities. Special mention must go to Dulwich Players stalwart Paul Sykes, who impresses in the contrastingly Celtic roles of tyrannical Major Ross and sympathetic hangman James 'Ketch' Freeman. His vocal and physical transformation was one of the highlights of the evening for me.

Equally standout is the performance of Andy Way, who holds the whole evening together as 2nd Lieutenant Ralph Clark, who has been given the dubious position of director in the 'play within the play.' There are many laughs to be had at the expense of the luckless convicts drafted in to play characters in George Farquhar's Restoration masterpiece, The Recruiting Officer. Izzy Tredinnick, Severine Powell, Rebecca Dallaway and Lucy Passmore must be given special mention here as they bring to life with aplomb the motley crew of female convicts to whom theatre has given a new lease of life. They show great range and ability in their doubling too.

In smaller roles there is able support from Ed Langley as the word-lover John Wisehammer, Steve Borrie as escaped convict John Arscott (whose absence jeopardises the entire production!) and Tracy Brook as the unfortunately named 'Shitty Meg'. A special mention must go to Chris Harvey who shines in the role of 'X Factor wannabe' convict Robert Sideaway, a kind of Nick Bottom down-under, who spends more time practising his curtain call than acting (the character I mean, not Chris!) Finally a mention to Bill Bailey, in his sensitively played dual roles as the doomed officer Harry Brewer, and the monosyllabic Captain Campbell, and a very stately Stefan Nowak, as the colony's governor Captain Phillip.

Congratulations also to the production team who have pulled off quite a feat. Scene changes were fluid and use of props and scenery very effective. Atmospheric lighting brought the mood of the barren Australian landscape to life very effectively. A minor quibble was the occasionally intrusive sound effects – I think I would have preferred to imagine the sound of the insects of the outback than have it provided for me. But all in all this was a highly enjoyable production, with a tremendously moving climax. My favourite line has always been Mary Brenham's 'I love this!' at the very end. May such a sentiment continue to apply to the very worthy Dulwich Players.

This play was first performed in 1988 but is set 200 years prior to that, telling the story of the first play performed in Botany Bay, Australia by the newly arrived band of convicts and soldiers. It is set in a rough time when transportation could be the punishment for a small crime, such as a single minor theft, and the wardens had almost total power over their charges. 2nd lieutenant Ralph Clark (Andy Way) was granted permission to put on a production performed by the convicts and the theme of the play is the ability of theatre to inspire people in difficult circumstances.

Captain Arthur Phillip (Stefan Nowak) and Major Robbie Ross (Paul Sykes) represented the two extremes of the approach to the convicts taken by the authorities; Stefan representing the more liberal approach and Paul the "flog 'em and hang 'em" brigade, with the other officers falling variously between these two extremes. All the officers seemed to be comfortable acting in their period costumes and they certainly were a colourful group.

We were treated to some delightful scenes as various convicts put themselves – or each other – forward to act in the play. Andy produced a clear sense of the tensions of being a director of this difficult company and I'm sure we all laughed with empathy at his line that the rehearsals "didn't seem to be going very well". Those playing the convicts had the challenge of acting people who themselves were acting, which can be a hard thing to pull off, but they did so with, for example, Mary Brenham (Severine Powell) coming out of her shyness during rehearsal. And whether it was Liz Morden (Rebecca Dallaway) as the toughened convict acting while under threat of death by hanging, John Wisehammer (Ed Langley) revelling in long words or Dabby Bryant (Izzy Tredinnick) talking about her beloved Devon (to name but three) they also managed to be quite different from each other while still coming across as a group of convicts.

Another aspect of the relations between the groups was provided by the relationship between Harry Brewer (Bill Bailey) and Duckling Smith (Lucy Passmore) – one of the more moving moments was Harry in Duckling's arms as he lay dying. The action proceeds up to the opening night of the production; for this the scene is turned so we, the audience, are backstage with the cast. John Arscott (Steve Borrie) had the technically challenging task of giving his lines to the upstage of the set loudly enough to be heard clearly by the audience, a task more than capably performed. And finally there was the curtain call – which we presume was choreographed by Robert Sideway (Chris Harvey) based on his earlier actions in the play!

The play calls for a number of costume changes as many parts are doubled up – or tripled up in the case of Tracy Brook – and this adds to the technical challenges the company had to overcome to put the play on successfully. It was interesting to see the full width of the stage being used in conjunction with the muslin upstage wall, the shadowing and boundaries produced by this and the variety of lighting provided a very atmospheric setting (although the unmasked upstage doors were a little distracting).

I had not been not quite sure what to expect from this play; when my daughter had been involved with a production at her school she had refused to let us come and see it. However I thoroughly enjoyed the show and offer my congratulations to director, cast and crew for a rich performance. 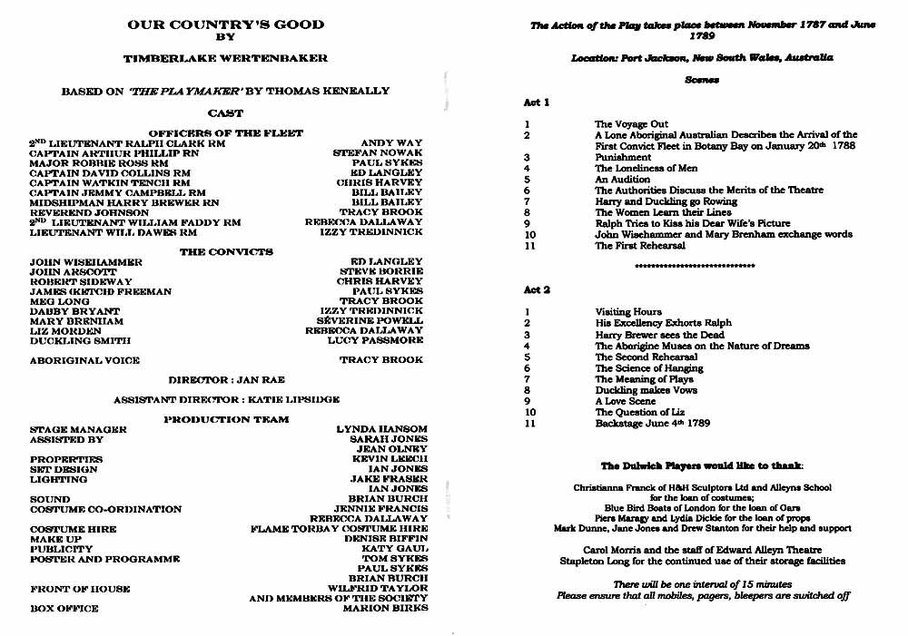